Ricinus communis (Euphorbiaceae) - castor oil plant; native to tropical Africa, naturalized throughout the tropics - seeds; the seeds of the castor oil plant, called 'castor beans', contain a very valuable oil that is used both as a purgative as well as a lubricant for jet engines and heavy machinery. The seeds are also infamous for containing ricin, one of the strongest poisons found in nature. One milligram can already be enough to kill an adult. At their micropylar end the seeds bear a fatty elaiosome to attract ants for dispersal; seeds c. 12mm long.
Some interesting facts about Ricinus:
Ricin: The seeds from the castor bean plant, Ricinus communis, are poisonous to people, animals and insects. One of the main toxic proteins is "ricin", named by Stillmark in 1888 when he tested the bean's extract on red blood cells and saw them agglutinate. Now we know that the agglutination was due to another toxin that was also present, called RCA (Ricinus communis agglutinin). Ricin is a potent cytotoxin but a weak hemagglutinin, whereas RCA is a weak cytotoxin and a powerful hemagglutinin. Poisoning by ingestion of the castor bean is due to ricin, not RCA, because RCA does not penetrate the intestinal wall, and does not affect red blood cells unless given intravenously. If RCA is injected into the blood, it will cause the red blood cells to agglutinate and burst by hemolysis. Perhaps just one milligram of ricin can kill an adult. The symptoms of human poisoning begin within a few hours of ingestion. The symptoms are: abdominal pain, vomiting and (sometimes bloody) diarrhea. Within several days there is severe dehydration, a decrease in urine, and a decrease in blood pressure. If death has not occurred in 3-5 days, the victim usually recovers.
Castor oil: Castor beans are pressed to extract castor oil which is used for medicinal purposes. Ricin does not partition into the oil because 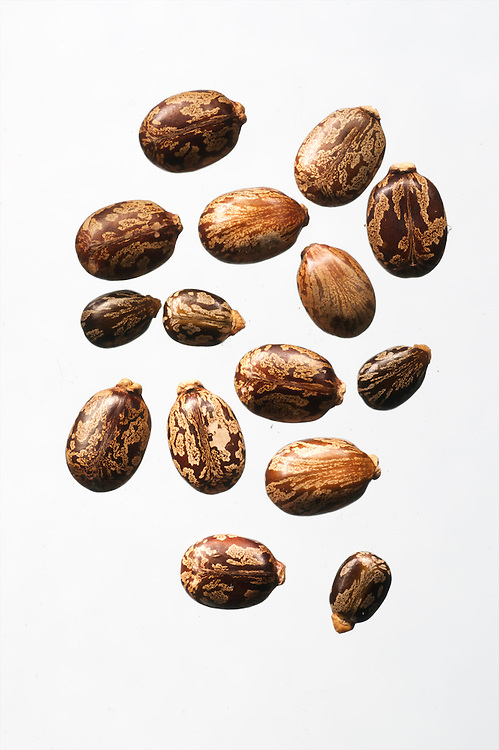