Sophora secundiflora (Fabaceae) - Texas mountain laurel, mescal bean; native to North America (Texas, New Mexico, northern Mexico)
The hard, fibrous and indehiscent camaras of the Texas mountain laurel (Sophora secundiflora, Fabaceae-Papilionoideae) appear to be adapted to dispersal by large herbivorous mammals such as antelopes. However, most of the potential dispersers in North America would have died out c. 13.000 years ago, at the end of the last ice age. The only native antelope in the southern US is the pronghorn (Antilocapra americana). Observations as to whether the pronghorn does eat the fruits of the Texas mountain laurel seem to be missing. The very hard and shiny seeds of the Texas mountain laurel are coloured bright red, a characteristic that generally indicated 'fraudulent' bird-dispersal ('fruit mimicry'). However, since the fruits are very hard and indehiscent, the conspicuous colour of the seeds is hard to explain from an adaptational point of view. Perhaps their colour is part of a two-stage dispersal mechanism, tricking birds into picking the seeds from the faeces of megafaunal herbivores.
interesting weblinks:
http://www.wildflower.org/plants/result.php?id_plant=sose3: Sophora secundiflora is very popular as a native evergreen ornamental tree within its range, valued for its handsome, dark green foliage and lush early spring blooms. It is drought-tolerant, prefers rocky limestone soil, and is native from central Texas west to New Mexico and south to San Luis Potosi in Mexico. Like many woody plants native to rocky soils, it is slow growing. The fragrance of Texas mountain laurel flowers is reminiscent of artificial grape products. The brilliant, lacquer red seeds were valued by indigenous people for ornament and ceremonial use; they contain the highly poisonous alkaloid cytosine (or sophorine), a substance related to nicotine and widely cited as a narcot 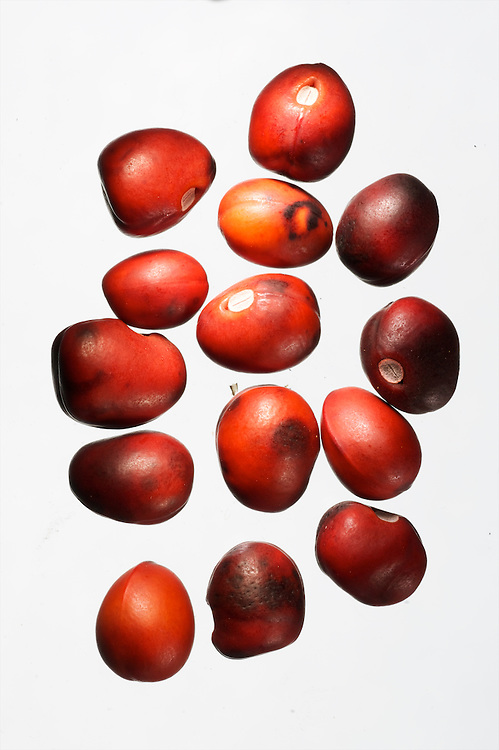